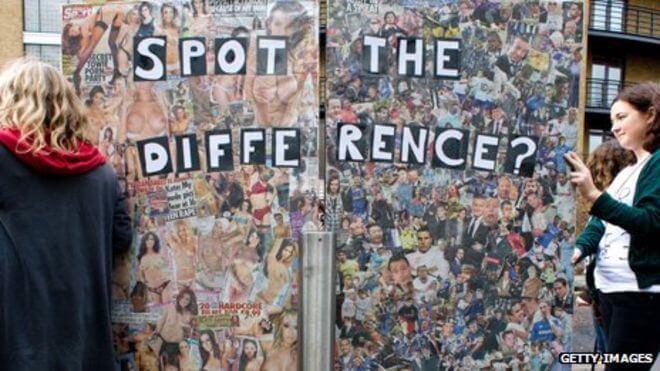 Five things about Women in Press

Lord Justice Leveson’s report into press standards criticised the way women are depicted in the newspapers, something that has struck a chord with campaigners. What do activists object to most?

In its 2,000-page verdict, the report says some papers “often failed to show consistent respect for the dignity and equality of women generally”.

There is only limited recent research on how the UK press treats women. Here are five of the most common complaints about the portrayal of women in newspapers:

Sex objects
In many cases there is no marked difference between pornography and some of the pictures in the tabloids, Anna Van Heeswijk of campaign group Object, told the Leveson Inquiry.

During her evidence, she also cited the example of a Daily Star story in 2001 about the singer Charlotte Church, then aged 15, with the commentary: “She’s a big girl now… looking chest swell”.

A report by Object and three other women’s campaign groups surveyed 11 British newspapers over a fortnight in September. It found “excessive objectification of women in some parts of the press, reducing them entirely to sexual commodities in a way that would not be broadcast on television, nor allowed in the workplace because of equality legislation”.

Stories were used to objectify women, the report argued. A Sun story – “Scientific proof: Coco’s buttocks declared ‘100% real'” – was an opportunity to print a photograph of a woman in a G-string. “It serves no news value and is solely based on objectifying and sexualising ‘Coco’ as a body part,” the report said.

“I find it so odd and perplexing I’m almost not offended by it. I’m all in favour of people eyeballing nudity. But in a newspaper?”

It’s a free market, says journalist Edwin Smith, who has written about the portrayal of women in the media. The papers are obliged by economic forces to show pictures of attractive women. “I remember hearing from wizened old hacks that both men and women are more likely to read a story when it’s accompanied by a picture of an attractive woman,” Smith says.

It’s not old fashioned male objectifying of women, he argues. The Daily Mail and its website is thought to be the only national newspaper with a higher female than male audience, he points out.

“It’s not as if it’s being designed for your archetypal builder on his tea break. It’s designed for women. That doesn’t legitimise it but it shows it’s not a case of patriarchal power.”

Once upon a time the debate was dominated by Page Three. There are different types of objectification today. On the one hand there are the Kardashian curves and bikini tableaux of Mail Online, Smith says. On the other, the more traditional tabloid nudity. “The question is, which is more demeaning?” he asks.

The WAG – wife or girlfriend – popularised during the 2006 World Cup is a tabloid staple. These women are celebrated for whom they are dating rather than what they do.

The report by Object said the papers are often too quick to stereotype.

“Stories, when they appear, portray women in stereotypes, emphasising the importance of women looking attractive and of being a good wife and mother, sometimes backing up support for traditional roles or for promotion of deemed attractiveness with dubious science.”

“Even reports of sporting prowess which appeared during the Olympics made frequent reference to a sportswoman’s marital status, romantic life and looks rather than focusing on her sporting victories.”

Then there’s questioning if a woman appears to stray from the norm. When TV historian Lucy Worsley said she had been “educated out of the natural reproductive function”, she generated a storm of negative headlines.

She wasn’t telling anyone else how to live, argues Haynes, merely stating her own preference. Yet some newspapers seemed unable to understand the idea of not having children “not necessarily being a bad thing”.

It shows up another problem with the newspapers. “As a woman, nobody is allowed to just be themselves. You have to represent your whole gender,” says Haynes.

On mothers, Siobhan Freegard, co-founder of parenting website Netmums, says the press is doing better. “We’ve seen a big change in how mums are depicted – it’s actually quite cool to be a mum these days,” she says, thanks to depictions of Peaches Geldof or Lily Cooper as mothers before celebrities.

“The only voice we had before would probably have been the Women’s Institute, which has very specific views. I think we can give as good as we get now.”

It was “supermum” Nicola Horlick – a mother-of-six who and investment fund manager in the City – who helped to kick-start a different kind of attitude, she says.

“We started seeing a different stereotype from the frumpy, stay-at-home mum baking cupcakes and from the Fairy Liquid ad. And that [new stereotype] wasn’t necessarily right either, but it means it is now balanced somewhere in the middle.”

Passive roles
Campaigners have long complained that there is a pronounced tendency across the whole of the media for women to disproportionately appear in passive roles – perhaps as victims of crime – instead of actually doing something.

Edwin Smith accepts there may be some truth in the argument that women are presented as victims, but that it reflects a wider culture.

“It’s a symptom of how things have been. It is lazy but it has more widespread appeal to portray women as a victim. And the reader is more likely to sympathise with a woman victim.”

Some newspapers – like the Sun – have campaigned extensively on the issue of domestic violence, of both female and male victims. But there is concern that across the media as a whole, the importance of such issues can be underplayed.

The Object report “found instances in which the violence and harm suffered by victims of abuse was marginalised, trivialised or even made invisible”.

Relative invisibility
Research by Women in Journalism this year, looking at a month of national newspaper newspapers, found that men wrote three quarters of all front-page articles and 84% of those mentioned or quoted in lead pieces were male. The most pictured males were Nicolas Sarkozy, Simon Cowell, and Prince William. The only females regularly pictured were the Duchess of Cambridge, her sister Pippa and Madeleine McCann.

Dame Marjorie Scardino’s decision to step down at Pearson means there will be just two top-100 UK firms led by women. So women are under-represented in public life, says Smith, adding that newspapers are only reflecting the society they report on.

There are examples of successful women whom the media jump at featuring. “A woman being shown in a good light is Christine Lagarde. She’s a superstar who is treated with dignity and respect. So you can’t say newspapers ignore successful women,” he adds.

Half the population but…

24% of news stories globally about women in 2011, Media and Gender Monitor figures show

Women in Journalism study showed 78% of front-page articles in British national newspapers written by men, and 84% of those quoted or mentioned are male

Of 84 news websites tracked by Global Media Monitoring Project, 23% of newsmakers were women in 2010

While the tabloids seem to show pictures of scantily-clad women, the so-called “qualities” focus mainly on men. Author and broadcaster Germaine Greer points out that women rarely feature in obituaries, and are more likely to appear in advertising than news. But blame is not always clear. Part of the reason women’s sport is ignored is because women don’t go and watch it, she argues.

Greer recently did an ad hoc analysis of photographs in the Guardian. “There were five times more pictures of men than women. The men tended to be named, the women were not named or were representing something generic.”

The Object report noted that on any given day “several pages of newspapers will appear without any reference to a woman at all, leaving the impression that women make no contribution to broader society”.

“And then there is what’s called the unconscious bias. I don’t for a moment think the media is doing this deliberately, but they just don’t think ‘are we being even-handed here?’ On women bishops there should have been weeks of debate, but it just seemed to disappear, because it’s just women.”

When stories arise they tend to be pigeon-holed, she says, for example as a blonde mum-of-two because sex sells. “It takes a senior woman to rise above just being seen as a sex object.”

The focus on women’s body shapes has an effect, Greer says. “It matters because women read it, think about it and are constantly insecure about their appearance.”

Earlier this year, an MPs’ report recommended that school children should take part in compulsory body image lessons. More than half of the public have a negative body image, “driven by the proliferation of media imagery portraying a so-called ‘perfected ideal’ that is entirely unattainable for the vast majority of people”, said Jo Swinson MP, chairwoman of the All Party Parliamentary Group.

Private Eye regularly takes the Daily Mail to task for espousing family values in its newspaper while putting women’s bodies on its website. The scrutiny can start surprisingly young. The magazine in its latest issue notes a Mail Online piece on “President Obama’s ‘blossoming… long limbed’ 14 year-old Malia – ‘Mommy’s girl grown up’.”

Paul Staines, who edits the Guido Fawkes blog, says that as a father of two young daughters he worries about the “unrealistic depiction” of women in the press. Air-brushing is a particular concern. “I sense that when my daughters get older they will try to aspire to impossible standards.”

And often women get a “slightly tougher ride” because the focus is on what they are wearing rather than what they have to say, he adds.

But citing the example of the MP Caroline Flint, who posed in a glamorous red dress and heels for a photo shoot for Observer magazine, he says: “I don’t think any male politician would pose lying on a chaise longue.”

MP turned I’m a Celebrity contestant Nadine Dorries also posed for Tatler, and Louise Mensch posed for GQ while still an MP. Their photos were picked up by the national press.

In this sense, says Staines, some female politicians “bring it on themselves” in an attempt to seek publicity.

The same might be said of celebrities. Paul Dacre, editor-in-chief of the Mail titles, told the Leveson inquiry that celebrities were “invading their own privacy”. Greer agrees, saying famous people often play the media game to promote themselves.

Leimon says it’s not just celebrities who suffer. “Take Angela Merkel, Michelle Obama or Hillary Clinton – when you look at any of those women, the angle that will be taken will be: ‘what handbag does she have?’ ‘What has she done to her hair?’ or ‘Look at the size of her upper arms’.

“Are they looking at their husbands’ upper arms? No, they wouldn’t dream of doing that. There’s a clear bias.”