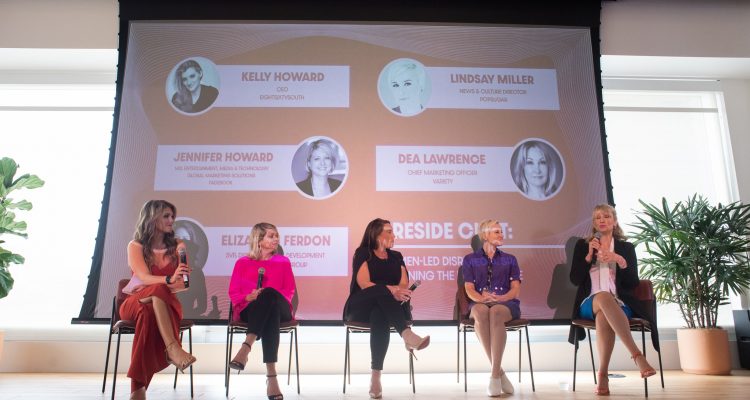 The Making of Dea Lawrence, CMO of Variety

During the Fireside Chat, four female executives gave their two cents on redefining the media space to where female leaders could thrive. One of those speakers was Dea Lawrence, Chief Marketing Officer of Variety. Lawrence oversees Variety’s public relations and communications strategy. She’s responsible for all the company’s sales programs, including the development, pricing and creative collateral for those programs and oversees a minimum of seventy events and summits a year. While all speakers were powerful and inspiring, Lawrence had an undeniable fierceness about her.

Here are some of Lawrence’s key points during the Fireside Chat:

She loves that Variety is female led

Some companies have a ‘mans club’ culture

When Lawrence spoke, her eloquence, intensity and genuinity could be felt throughout the room like a vibration.

Her persona was a mixture of Cher and Miranda Priestly BUT nice.

There was no doubt that she had formed a thickskin from her experiences. Despite her extreme badassness, it was also very clear that she was happy to be there and inspire others.

Following the panel session, I approached Lawrence to share my admiration of her and request an interview. Not all executives are enthusiastic and willing to give their time to those who have little to offer in return. Nonetheless, Lawrence’ face lit up, hot pink lipstick included, and she graciously gave me several minutes to learn about her professional past.

Lawrence had an extremely unconventional path to her career — one that ultimately set her apart from all her colleagues. She was an actress. Lawrence starred and toured in broadway shows, did regional theatre, commercials, soap operas and guest starred in TV shows.

“I was auditioning all the time, constantly meeting new people and had to put myself out there. You’re criticized all the time as an actor,” Lawrence said. “They say horrible things to your face blatantly – things you can’t believe someone just said. That criticism is so much harsher than anything I’ve experienced in business.”

All throughout Lawrence’ acting career, she did sales on the side. Her primary focus was in real estate and cosmetics. In fact, she was head of sales at the third most expensive condominium building in Manhattan. It were these skills that led her to digital advertising.

In 2000, Lawrence was working for a company that was mapping out ‘who did what’ in Hollywood. She learned about their website and became intrigued with digital marketing. Soon, the company sold to iFilm where Lawrence became Director of Marketing. After she mastered digital advertising, people wanted to hire her.

In 2001, Lawrence began working at Variety where she helped build out their digital business as VP of sales and marketing.

“I didn’t believe in a glass ceiling until my head crashed into it.”

“Because it was digital, a lot of recruiters were coming after me. I saw that Variety’s business was not investing in digital and that they were going to start to come down,” Lawrence said. “A recruiter got me a great gig and (in 2008) I went to Pointroll and was the VP of sales there.”

After about five years at Pointroll, Lawrence decided she wanted to ‘go mobile,’ so she went to AT&T where she ran a sales team. In 2013, Lawrence decided she wanted to learn programmatic advertising, so she went to TubeMogul where she also ran a sales team. Then in 2015, Lawrence became SVP of national sales at a start-up. That same year, Variety offered her the role of Chief Marketing Officer, and she took it.

“I pivoted. Luck was truly a big part of it but I also recognized that no one wants to do this thing (digital marketing), but it looked really important, so I did it,” Lawrence said. “It was challenging for me because I’d talk to my actor friends and they’d be like ‘you’re doing what? Selling technology?’ People knew me as an actor…I had to ignore that and pay attention and just not be afraid.”

In terms of Lawrence’ experience being female in the industry, it’s hardly phased her.

“I never thought about it. I was an actor and I’ve seen a lot. Not too much phases me,” Lawrence said. “I just, I actually like working with men so I never really thought that any of these guys were going to stop me and I didn’t believe in a glass ceiling until my head crashed into it.”

“…it’s a boys club and somebody needs to write about this more,” Lawrence said. “I was just talking to another very successful woman from a tech company and she was having issues with some men. She was telling me this like I’d be shocked, but I wasn’t. I’ve seen it happen.”

Nonetheless, Lawrence believes there are ways to be successful in these environments. She expressed an overall fondness of her experiences with men, many of whom mentored and supported her throughout her career.

When asked for advice on achieving success to those starting out in the industry, Lawrence weighed heavily on the interview process.

“People make a judgement from the minute you walk in through that door. Do your research about the company you’re interviewing with. Don’t walk in uninformed,” Lawrence said. “Follow-up within 24 hours, 12 hours. If someone doesn’t follow-up, they’re done. How will they follow-up with clients?”

For Lawrence, her unique background contributed greatly to her success in both interviewing and becoming a female leader.