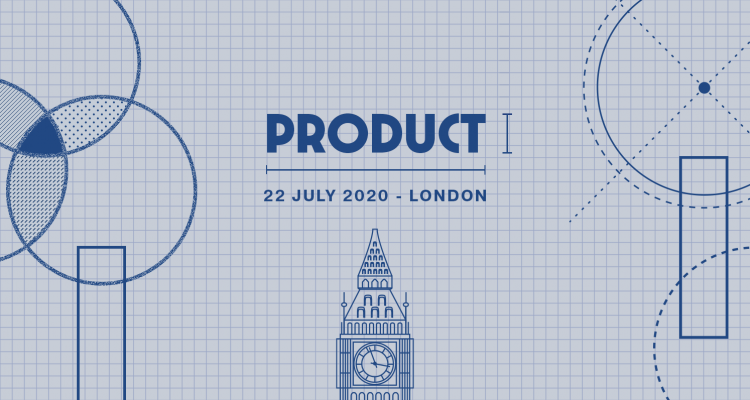 Hallie Golden in Seattle – The Guardian 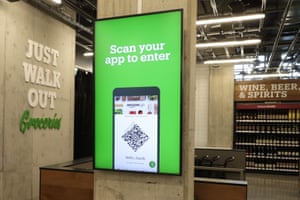 An automated gate equipped with a series of scanners greets the mid-morning wave of shoppers entering the first bricks and mortar Amazon Go Grocery store in Tuesday in Seattle.

It was opening day for the supermarket, and one by one each visitor placed their phone, with the Amazon Go app open, onto a clear square, allowing them access to pristine aisles of everything from oranges and avocados to yogurt and bacon.

This is the trillion-dollar company’s first cashier-less supermarket. Coming out on the heels of the Amazon Go stores, which offer meals and snacks, but no check-out lines, the new store uses the same core technology. 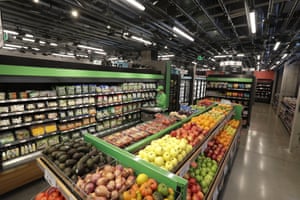 Through a series of cameras and sensors, everything a shopper picks up is automatically placed in their Amazon online basket account. It doesn’t matter whether you put it in a cart or straight into your personal backpack, if you pick it up and don’t put it back, once you leave the store, you’ll be getting an emailed bill that details the amount of money taken out of your Amazon account

There were small shopping carts, complementary bright green, reusable bags with the words “Amazon Go Grocery” on them, and even empty table tops specifically designed for mid-shop grocery sorting. A small team of eager employees hovered around, transporting produce from one aisle to another and answering questions.

But at the exit, instead of a checkout register and cashier, there’s simply automated gates that open when you step up to them.

Maddison Nicholas, 23, shopped at the store Tuesday and said the prices seemed cheaper than Whole Foods (also owned by Amazon) or QFC (Quality Food Centers), a local grocery store chain. But, after filling her bag with raspberries, strawberries, blackberries and watermelon, she said the automated system “makes it easy to spend more money than you would pulling out your card and seeing the total”.

At 10,400 square feet, the window-filled building has a slightly smaller selection of products than traditional chain grocery stores. The supermarket also has one aisle full of home goods, including laundry detergent and shampoo, and a section filled with alcohol, which requires visitors show their id to an employee before entering.

This is the tech company’s latest foray into the grocery store industry. In 2017, it bought Whole Foods and the hundreds of stores that make up the multinational supermarket chain. Amazon, which is headquartered in Seattle, also offers same-day grocery deliveries. 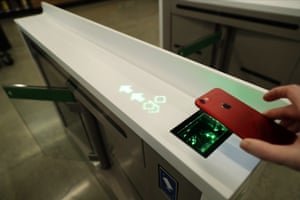 There is something slightly unnerving about leaving a store without so much as scanning an item. Perhaps that’s why there’s a giant sign at the entrance with the words, “Just Walk Out Groceries.”

Stephen Sheldon, 73, traveled about 9 blocks from his home to get to the store, and called the automated system “interesting,” but said he doesn’t really trust it.

“I’m afraid to touch anything unless I plan to pick it up and put it in my bag,” he said.

Sheldon, who is retired, said he lives much closer to three other grocery stores, so this one won’t be his go-to spot. He said he prefers the more traditional grocery stores, where he can watch each item get rung up by a clerk, and argue about prices if there’s a mix-up.

Rex Farrand, 36, just moved from New York to Seattle with his fiancé three months ago, and said he decided to visit the store after hearing about it on the news. He said he liked the small selection because it wasn’t overwhelming, and remarked on how convenient the automated system is.

“I can just imagine if you’re busy, coming here, I know I can get in and out as fast as I want to get in and out, and I’m not dependent on the lines or the registers and the clerks, so that’d be a reason to come to it,” said Farrand.